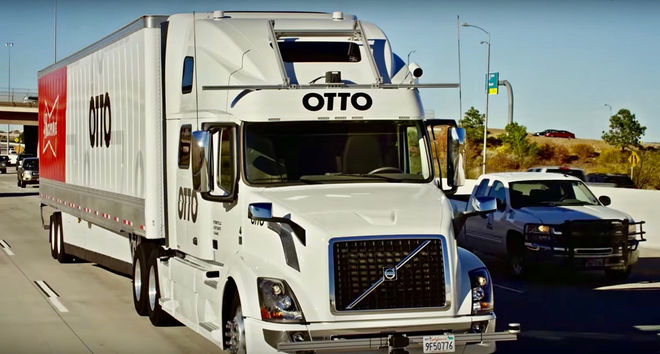 Surge pricing could soon be a reality in the trucking industry; ride-hailing company Uber just launched a new service called Uber Freight and although little has been revealed on what or how the Uber branch will work, it seems like we can expect not only the arrival of surge pricing but also the introduction to autonomous trucks.

Last August Uber acquired a startup called Otto who was working on bringing the first self-driving trucks to roads. The company has actually had a few successful runs, namely the delivery of 50,000 Budweiser beer cans in Colorado. Otto aims to make things easier for long-distance truckers. Although some have worried about jobs, Uber stands by their statement that those in the trucking industry have nothing to worry about. The self-driving trucks would only really be autonomous once they’ve reached the highway for longer empty stretches of road.

The story about Uber Freight isn’t just about the possibility of autonomous trucks – it’s about offering a new way of shipping items across the country. Much like Uber’s current platform, Uber Freight will allow people to sign up to have items shipped and others will join in on the shipment, which allows items to be driven off without a contract established with a traditional trucking company.

Where Otto and Uber meet is that Uber Freight will be able to gather data from the drivers on the platform allowing self-driving trucks to learn from actual experienced drivers. It’s also allowing Uber to move forward in the development of a possible fleet of self-driving trucks while authorities play catch up in terms of regulations linked to autonomous vehicles.

As a matter of fact, before being acquired by Uber, Otto had planned for a platform similar to Uber Freight. When Uber came into the picture, both companies worked together to further develop the idea and concept of self-driving trucks. The timing is also interesting as more and more companies are turning their attention to the trucking industry namely Tesla who is also working on a self-driving ruck and Nikola Motor Company which is currently working on a hydrogen powered semi-truck.

Uber doesn’t have much information to share regarding the platform or its plans in regards to self-driving trucks. For now, the Uber Freight website invites shippers and carriers to sign up with their emails to stay in the loop about future developments and announcements. One thing is for sure, the road is long before a fleet of autonomous semi-trucks is let loose, so Uber Freight will still need human drivers, for now.