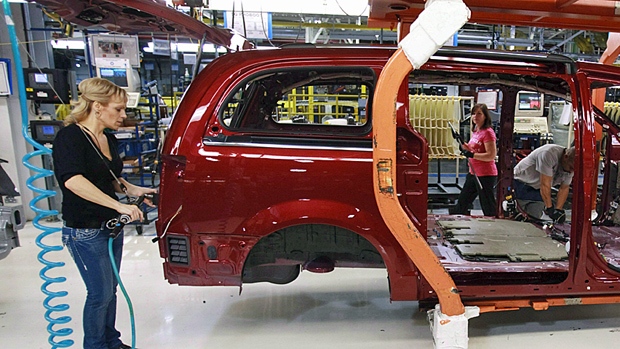 The Canadian dollar has been hovering in the low 90-cent range versus its American counterpart since the beginning of the year, and the U.S. economy is coming off three years of slow-but-steady growth. These facts might be expected to boost Canadian manufacturing exports, around half of which come from Ontario, but they haven’t done so yet. After growing by a paltry one percent last year, exports actually dropped by 1.4 percent in March, the latest month for which figures are available. Combined with a slight pickup in imports, the unexpected decline shrank Canada’s balance of trade and sent economists looking for answers.

Harsh Weather In the Winter

One possible explanation is the unusually harsh weather of the past winter, which has also been blamed for a one percent contraction in the U.S. economy for the first quarter of this year. A six-week strike by truckers at Port Metro Vancouver that lasted until the end of March could also be a factor.

The consensus in the business community, however, is that structural problems such as high taxes and labor costs are responsible for a large part of the lag in exports. The Honourable Perrin Beatty, speaking as president and CEO of the Canadian Chamber of Commerce, has said that Canada is underperforming in this regard, and should also work harder on worldwide promotion of “Brand Canada”. Major manufacturers are reluctant to build new factories in Canada, with many opting to do so in Mexico or the U.S., which are not only cheaper to begin with but also offer substantial tax breaks and other incentives to draw new jobs.

Hyundai Canada, for instance, hasn’t found it worthwhile to open a new Canadian factory even though it’s enjoying strong sales in the country. Magna International’s CEO, Don Walker, recently cited the high cost of electricity and the threat of a provincial pension plan in Ontario as factors militating against locating a new plant there. Some existing manufacturers are even packing up shop: Kellogg and Heinz have already left, and Unilever is now set to close a Brampton facility employing nearly 300 people.

Stephen S. Poloz, Governor of the Bank of Canada, seems to share the view that there’s something wrong. He testified before Parliament in April that Canadian exports are up to $40 billion per year less than they should be, calling the lag in manufacturing exports puzzling, while noting that energy exports are doing well. Government and consumer spending have propelled Canada’s economy in the last few years, he said, but may have peaked, and thus exports should be increased as a way towards future growth.

The Harper government is hoping that free trade agreements such as the CETA with the EU and the CKFTA with South Korea will help. (The Canadian Council of Chief Executives recently put out a report suggesting that unilateral free trade would help even more.) Another government initiative will embed trade commissioners in business organizations throughout Canada with the goal of coordinating exports more effectively.

Further action in Ontario could depend on who wins the general election on June 12; there has been a good deal of debate during the campaign about the best way to jump-start the province’s economy. The Liberals are calling for more government spending, while the Tories want reductions in corporate taxes. Both the Tories and the NDP want to lower electricity rates, and the trailing NDP also aims to provide more money for daycare subsidies.

Whatever happens in the election, there’s reason to be optimistic for the coming year. Basic conditions are good: the Canadian dollar is still relatively weak, American consumers are starting to spend more, and business with China and other developing markets is going up. Exports may not have reacted as quickly as expected, but that’s not likely to last forever, and Export Development Canada believes that this will be the year they catch up, predicting a total increase of over 6 percent for 2014.