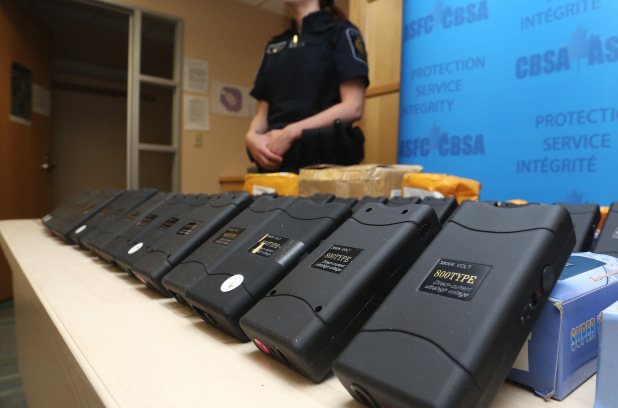 A Saint John’s businessman, Scott Joseph Waterman, 32, who pleaded guilty to importing prohibited weapons into Canada, has received a conditional sentence of one year, as well as 18 months on probation and a 10-year ban on possessing firearms.

Waterman bought the pepper spray and stun guns at a flea market in Florida while on a family vacation in 2012, then mailed them from the US to his address in Newfoundland and Labrador. Unfortunately for him, the weapons were detected by a scanning device at a Montreal airport, and he was arrested after accepting a controlled delivery of the package.

Stun guns and pepper sprays are classified as prohibited weapons under section 84(1) of the Canadian Criminal Code, along with switchblade knives, brass knuckles, and more exotic implements such as nunchakus and shuriken. Section 104 of the Code makes their importation an offense punishable by imprisonment for up to five years.

However, Waterman’s attorney, Randy Piercey, argued that several years in jail was too harsh a penalty for such a crime, particularly in Waterman’s case. Piercey said that Waterman is an upstanding member of his community, owns a store and other businesses, and had no intention of misusing the weapons. Crown prosecutor Bill Howse apparently agreed, and the two jointly recommended the conditional sentence to Provincial Court Judge Lori Anne Marshall.

Marshall stated that, despite their nonlethal character, the weapons were dangerous and unnecessary, and noted the duty of the judicial system for public safety. In the end, though, she adopted the recommended conditional sentence in light of Waterman’s unequivocal recognition that he was at fault in the matter.

Waterman had characterized his actions as “stupid” and “wrong” during the hearing.