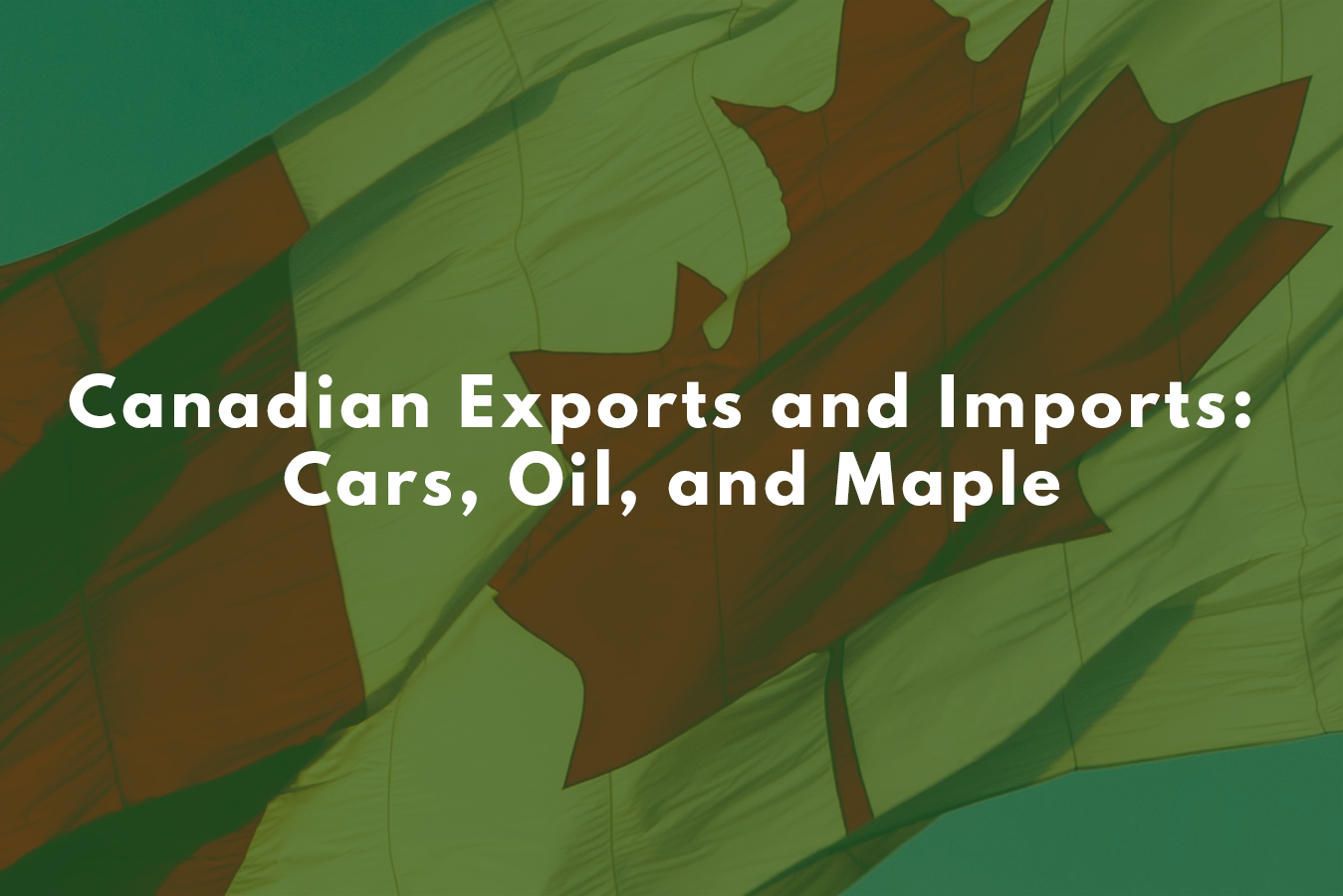 Canada is a trading nation; our total trade is worth more than 66% of our GDP, the second highest in the G7 after Germany. We’re the 12th largest export economy in the world, and at just over 35 million people, that’s an accomplishment to be proud of!

What does Canada Export?

The bulk of Canadian exports make their way to the American market — the number tends to hover around 75% of all exports, dwarfing trade with any other nation. Our neighbours to the south snap up petroleum, cars, and car parts more than any other Canadian exports, but the full list of goods we send south is long and comprehensive.

The remaining fourth of Canadian exports primarily heads to 19 other trading partners, like China and Mexico. Though dwarfed by the United States, the United Kingdom has a surprisingly strong appetite for Canadian goods. We primarily export gold, diamonds, and precious metals to the UK, but aircraft and vehicle parts are common as well.

A whopping 80% of the world’s maple syrup — or more, depending on the year — is exported from Canada. The United States, Germany, and Japan buy quite a bit of our syrup, but the list of maple importing countries is long thanks to our near-monopoly on the product.

What does Canada Import?

Five countries are the source for approximately 75% of all imports to the Canadian market.

As a major trading partner, Canada and the United States have a long history of mutually beneficial trade. While we send cars, petroleum, and everything under the sun to the United States, they send the same back.

We also import medicines, pesticides, fruits, appliances, and more from the United States.

Also called the world’s factory, China is an affordable source for manufactured goods for countries around the world, and Canada is no different. We overwhelmingly import more from China than we export to their markets.

From China, we import manufactured equipment and products, like computers, broadcasting equipment, furniture, vehicle parts, and anything mechanical. Much of the clothing we wear was produced in China, and many shoes on the shelves are Chinese-made.

Like China, Mexico is an affordable source of manufactured goods. Like the United States, Mexico is a member of free trade agreements like NAFTA that make it attractive for Canadian businesses.

Mexico and Canada have a pretty reciprocal trade relationship when it comes to cars. We both import and export vehicles and vehicle parts with Mexico. Other Mexican exports include furniture, electronic parts, and fresh produce.

Our share of the NAFTA pie is bigger with the United States, but Mexico is still an important source for free trade goods.

Germany supplies the world with well-made, high end car brands like BMW and Audi. A number of pharmaceuticals are also manufactured in Germany.

Japan also has the mechanical know-how — well-made compact cars, robotics, and computer parts from Japan all make their way to Canadian markets. A not-insignificant amount of gold is also exported from Japan to Canada.

International trade defines the Canadian economy. From gold to gas to cars to the most maple syrup in the world, we have a lot to offer our trading partners. Robust relationships between importers, exporters, and customs brokers keep those routes flowing — so happy importing!